Importing Data from Another System

You are using Internet Explorer 11 or older. This browser is no longer supported and not all pages will work properly if you use it. Please upgrade your browser now. If you like Microsoft, use Edge, otherwise try the latest version of Google Chrome or Firefox.

Golf League Tracker allows you to import a player list or historical scores from another system to help you quickly get your league up and running. The information must be in an Excel spreadsheet and each piece of data on a separate row.

Click here to download a sample Player List file of data which could be imported to better understand the format that it needs to be in. Note that the column order is not important, but certain columns will be required depending on what kind of data you're trying to import.

In the League Setup tab of Administration, click on "Import Data":

Choose what kind of data you'd like to import:

Each player must be saved in a separate row in your Excel or CSV file, which each piece of information in it's own column. If you're using Excel, only the first worksheet will be imported. The following information can be imported:

Click "Choose File" and find your file on your computer to upload. Select the file and click "Open".

Click the blue "Upload" button when you're ready to upload the file.

Once the file is uploaded, the contents of the file will be displayed. You then need to tell Golf League Tracker which columns from your data match the fields in the Golf League Tracker system. For players, you must choose at least a first name and last name column. You can also choose which rows to import. In this example, the Row 1 is the "header" row in my Excel file, and I don't want to import that row: 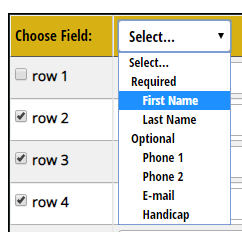 After you match the columns, they will be highlighted to show you that the column will be imported. Also note that you can edit the player data by typing in the grid before you finish the import:

Once you're ready to go, click the "Import Players" button to load the data. After importing, you will be given a grid which shows the results of the import. Sometimes you will have errors with some data, such as:

In this example, you can see I had some players who were already entered, or they were duplicated in my import file.

Importing historical scores works just like importing players, but there are some things to consider: